Yard Dogs: Equipment to Keep Trailers on the Move 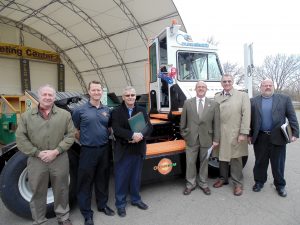 “We were looking to implement a cost-effective Clean Fleets project as part of the Clean Energy Communities Program, and the Orange EV truck made sense both financially and operationally,” said Mark Odell, Chautauqua County Legislator. “We not only saved on the purchase price, but also expect to see reduced lifetime operating costs.”

In New York State, fleets have been purchasing Orange EV’s pure-electric terminal trucks for about the cost of a new diesel. From the first day of operation these fleets have been saving up to 90% on fuel and reducing maintenance and repair costs, while realizing a range of health and safety benefits.

“It’s been exciting and rewarding to work with Chautauqua on this project,” said Saxton. “It’s taken only a few months from concept though evaluation, decision, and deployment and they’ve become the nation’s first county government to deploy 100% electric, Class 8 trucks.”

Chautauqua’s new electric yard truck, which is shuttling trailers at the North County Transfer Station, is expected to work through a full shift on a single charge.

“The Orange EV truck is much smoother, quieter and cleaner than the old diesel truck and will create a better, healthier environment for employees and the surrounding community,” said George Spanos, Chautauqua County Public Facilities Director. “We are already planning to order a second Orange EV yard truck in January 2018 to be deployed at the South County Transfer Station.”

Kansas City based Orange EV is the leading OEM providing industrial fleets with heavy duty electric solutions that do the same work while eliminating diesel fuel and emissions. Building both new and re-powered vehicles, Orange EV was the first and is still the only manufacturer building 100% electric Class 8 vehicles that have been commercially deployed into container handling operations. Contact Orange EV at 866-688-5223, Sales@OrangeEV.com, or by visiting the company’s website at OrangeEV.com.  Media:  Contact