Ruan adds another EV terminal tractor to its fleet

As featured in FleetOwner.

After successfully deploying an Orange EV truck in Minnesota, the large for-hire carrier is adding another in Missouri to ramp up its sustainability and uptime goals. 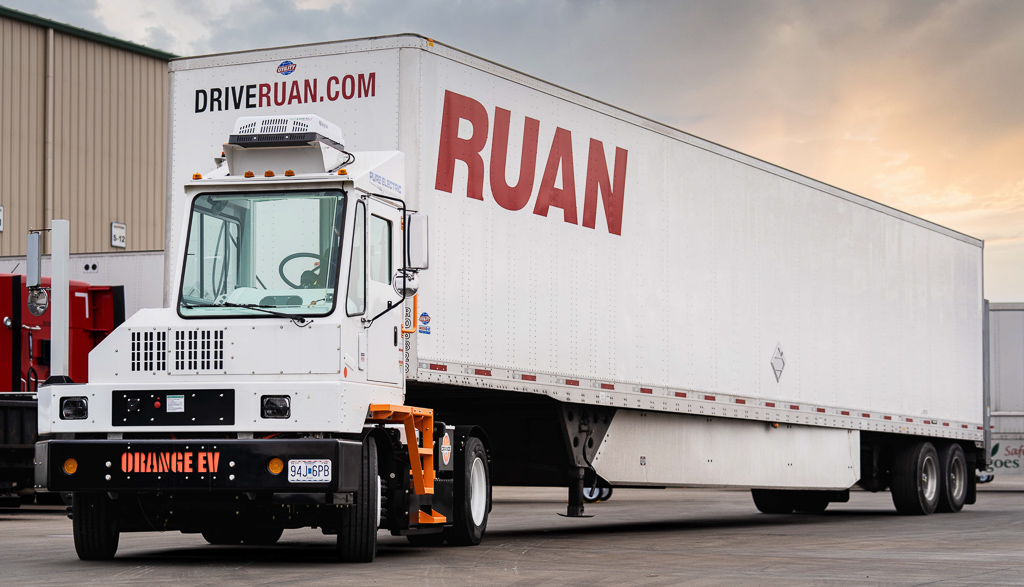 Ruan Transportation Management Systems added another battery-electric terminal tractor to one of the largest fleets in North America. The new Class 8 Orange EV terminal tractor will be based in St. Joseph, Missouri, after the carrier found success with its first EV yard tractor in Minnesota.

The carrier added its first Orange EV truck 18 months ago. The company, which ranks No. 37 on the 2022 FleetOwner 500: For-Hire list, announced this month that the EV tractor is part of its movement to explore alternative fuels for heavy-duty equipment to create a more energy-efficient supply chain.

Ruan also is testing compressed natural gas (CNG), renewable natural gas (RNG), biodiesel blends, and renewable hydrocarbon diesel within its fleet of 3,500 vehicles. Gehring added that the Orange tractor at its Minnesota terminal has been a reliable piece of equipment that has “exceeded uptime expectations.”

A recent North American Council for Freight Efficiency study on electric commercial vehicles found that terminal tractors are one of the best paths for Class 8 tractor conversion to battery-electric vehicles. Orange EV has more than 100 fleet customers across the country using about 400 of its tractors.

“If you’re only a heavy-equipment operation, we suggest yard tractors as a way to go electric,”  Mike Roeth, NACFE’s executive director, told FleetOwner. “The transformation to EVs in this industry—is not this simple but—basically looks like smaller vehicles like vans and step vans, then box trucks, then short regional haul of beverage and groceries, then longer regional day cabs, and ultimately sleeper tractors.”

The Orange EV tractor part of the NACFE study was Ruan’s yard dog running in Minnesota. “That tractor has been there for a year and a half—and I don’t think it’s missed a single day of service,” Zack Ruderman, Orange EV VP of sales and marketing, told FleetOwner after the NACFE study was released in March. “When we talk about the reduction in maintenance costs—that’s one piece of it—but the improvement in uptime is another piece of it.” Along with being low-hanging fruit for companies looking to reach sustainability goals, EV yard tractors have early records of reduced maintenance costs, according to NACFE. The quieter and smoother-moving vehicles also offer a better working environment for operators, the NACFE Run on Less—Electric report noted.

“We have received positive feedback from our drivers, saying that they prefer the modern technology of the BEV yard spotters,” Tim Burke, the VP of transportation for Albertsons Cos., a private fleet using about 20 Orange EV tractors across the country, told FleetOwner. “They like that these EV terminal tractors improve uptime, do not require fueling, and there’s less preventive maintenance. They also appreciate that they are quiet, cool, and odorless.”

Orange EV’s Ruderman noted that the NACFE study also should alleviate fleet worries about EVs operating in colder climates. “Cold weather is a common concern,” he said. “Fleets want to know if it will work. Meanwhile, diesel fuel gels in really cold weather—an issue you don’t have with EV yard tractors.”

During the NACFE tests, Ruan reported temperatures as low as 33 degrees below zero Fahrenheit. “They had no issues,” Ruderman said. “The truck works fine. It just uses more energy to heat the cab and heat the battery boxes to make sure the batteries don’t get too cold.”

Ruan noted that its exploration of alternative fuels eliminated hundreds of thousands of tons of carbon dioxide this decade. The 90-year-old, family-owned transportation and logistics management company offers dedicated and managed transportation, warehousing, and brokerage services across the U.S.

It plans to further its sustainability efforts by adding more EV terminal tractors across the country, Ruan announced earlier in April.