Fox 4 Kansas City speaks with Orange EV regarding the region’s growing EV industry and expanding opportunities for both workers and companies.

Orange EV launched in 2012 and started delivering their first electric yard trucks to customers about seven years ago.

The yard trucks pull up to 80,000 pounds around industrial lots, requiring a lot of torque. Early on, Orange EV admits, many people didn’t think it would be possible with an electric motor. 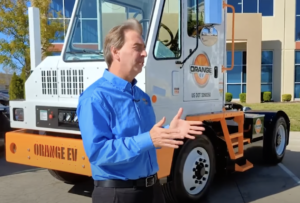 Neutgens said Orange EV yard trucks not only do the job but often hold up against the demands of industrial lots and pulling heavy loads much better than their diesel counterparts.

Neutgens says the yard trucks are often run around the clock, every day of the week, requiring Orange EV to build a truck that could quickly recharge. They’ve created a product that now is able to keep running continuously, only charging during time that it would already be idle during a driver’s lunch break, bathroom break, or shift change. He said diesel trucks can take substantially more time to refuel, especially if they have to leave the industrial yard to do it.

The goal from the start was to create a product that doesn’t damage the environment but they still had to convince companies to actually buy their yard trucks.

“We wanted to make sure we had a product that made sense financially long before anybody really considered the emissions side of it,” Neutgens said.

Now, Orange EV VP of Sales and Marketing Zack Ruderman said the company has sold more than 500 yard trucks to 130 fleets of vehicles across the nation, in 29 different states in all different weather climates.

“It gives fleets the confidence that this is not a science project,” Ruderman said.

“If you think about who are the big companies that are moving a lot of freight, a lot of parcels, then there’s a good chance they’re using an Orange EV yard truck,” Ruderman said.

Orange EV recently got a $35 million investment to help them keep growing into a new and bigger space where they’ll also need to hire more workers. Right around the same time, Panasonic announced it will soon bring 4,000 new EV plant jobs to De Soto with another 4,000 jobs in companies that open up around De Soto to do business with the plant.

Where some might see competition in an already tight job market, Orange EV CEO Wayne Mathisen sees it differently.

“It’s just another validation that this is where the world is going to go,” said Mathisen.

The technology in electric yard trucks isn’t exactly the same as what’s needed to make electric passenger vehicles and the needs both vehicles need to address are often different. Yard trucks top out at 25 miles per hour and passenger vehicles need to be able to travel hundreds of miles on a single charge, especially before the nation’s electric vehicle charger infrastructure is built out.

But Orange EV said a bigger focus on the EV industry as a whole, which will come with Panasonic’s plant, can only help.

“You know, we train our employees,” Neutgens said. “There’s nobody out there we can go to and say, ‘Hey, were you working at that other electric vehicle company?”

The thought is that it could help expand opportunities for workers and other companies while getting in on an industry that’s growing every year.

“To see that in the heartland instead of just thinking of this of something that’s happening in California, or happening on the coast…it’s happening right here,” Mathisen said.

“The biggest thing for us that does is just the recognition that the technology’s here,” Neutgens said. “The world is changing and if there are some people who are on the fence or not even thinking about it, they’re now coming to the game.”