Loved the electric trucks @DoleTweets showcased this morning supported by @AirResources. I’m committed to advocating for resources to ensure industry can transition to meet our zero-emission goals. Thanks Dole! Other portside tenants should join, as we fight for #FleanAirForAll pic.twitter.com/0FUtcJHZF4

At a ceremony at its terminal yard at the Port of San Diego, California, Dole Food Company announced a $1.5 million dollar electrification project at its West Coast port operation. This project has funded five new electric utility tractor rigs to add to Dole’s growing electric fleet of container transfer trucks.

These new terminal tractors — adding to two existing electric vehicles currently in operation at the facility — are funded in part via the Clean Off-Road Equipment Voucher Incentive Project (CORE) administered by the California Air Resources Board. CORE is intended to accelerate deployment of advanced technology in the off-road sector by providing a streamlined way for fleets to access funding that helps offset the incremental costs of such technology.

Dole will retire four diesel-powered terminal tractors with these new battery-electric units, resulting in a substantial emission reduction. As per the research submitted in Dole’s application to CORE, each new unit will avoid 0.3194 tons NOx/year over the 10-year life for a total reduction of 3.194 tons NOx per UTR and a cumulative project emissions reduction of 12.776 tons NOx over the 10 years. 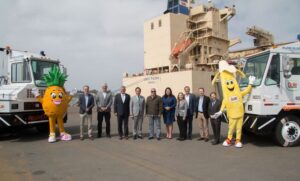 With these changes, Dole said, 35% of its port transfer terminal tractors are electric, well on its way to meet the company goal to be 100% electrified in its UTR fleet by 2030.

In alignment with The Dole Way sustainability framework, Dole has demonstrated its continuing commitment to the local environment and surrounding communities of the port by the following:

Dole will be announcing a partnership with San Diego Gas & Electric to build a new fleet charging station at its facility at the Port’s Tenth Avenue Marine Terminal as it moves further to electrify all 20 UTRs in its fleet.