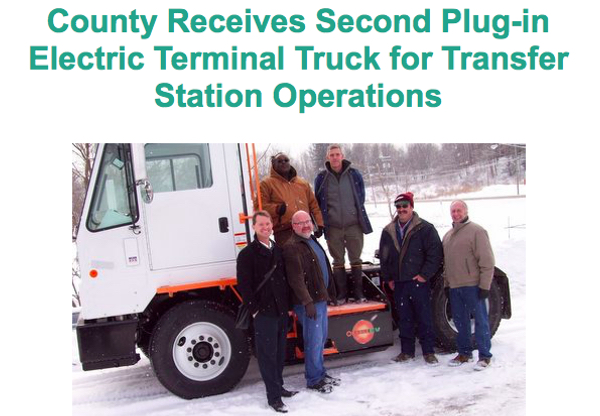 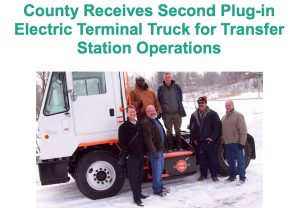 The truck is provided by Orange EV, a Kansas City, Mo.-based industry that builds, sells and services industrial electric vehicles. The terminal truck, also known as yard jockey, will be used to shuttle loaded and empty transfer trailers in and out of the compaction area at the South County Transfer Station. This pure-electric terminal truck will replace a diesel-powered unit that is more than 15 years old and will completely eliminate the previous truck’s diesel fuel consumption and emissions. It is also much smoother, quieter and cleaner than a diesel truck and will create a better, healthier work environment for employees; lower energy costs; and reduce the county’s carbon footprint.

The truck was purchased as part of the Department of Public Facilities Division of Solid Waste’s Capital Vehicle and Equipment Replacement Program. The county was able to purchase the truck by taking advantage of the New York State Electric Vehicle Voucher Incentive Program. This program aims to accelerate the deployment of alternative fuel vehicles and verified diesel emission control technologies for medium to heavy duty commercial fleets in New York State. By participating in this incentive program, the county experienced a reduction of 51 percent in its final cost for the new terminal truck.”