As featured in California Business Journal 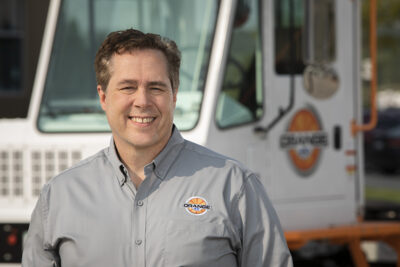 Less than a decade removed from its founding, Orange EV, the nation’s first manufacturer to offer 100 percent electric Class 8 vehicles, has delivered over 250 electric trucks across 19 states, along with Canada and the Caribbean, and is approaching one million duty hours.

While a growing number of consumer cars across the nation’s highways narrate the increasing use — and overwhelming acceptance — of electric vehicles, the biggest transition toward EVs may well be happening in the background.

Founded in 2012, Riverside, Missouri-based Orange EV (orangeev.com) was the nation’s first manufacturer to offer 100 percent electric Class 8 vehicles. Since delivering its first terminal truck in 2015, the mid-America firm has spread its charge from coast-to-coast.

Working across the spectrum of the country’s railyards, warehouses, distribution centers and manufacturing hubs, terminal trucks — also known as “spotter trucks” and “yard trucks” — are special-purpose vehicles that move and reposition trailers around a yard so they can then be taken by over-the-road trucks to their next destination.

Less than a decade removed from its founding, Orange EV’s terminal trucks have made the world go ’round sans fuel emissions. The firm has delivered over 250 trucks (for better than 90 fleets) across 19 states, along with Canada and the Caribbean. Cumulatively, the company’s trucks are approaching one million duty hours.

For Orange EV’s brass, said numbers can, should and will ascend. “Our expectations are always evolving,” says Wayne Mathisen, co-founder & CEO of Orange EV. “We knew from the outset that our truck would make financial sense, but there is an adoption curve, a learning curve on the part of our customers. So, we’ve had to be patiently impatient as clients have learned that a heavy-duty electric vehicle would work in their environment and also save them money.”

Success transitioning customers away from traditionally-powered diesel terminal truck comes by way of education, safety, efficiency, cost saving and environmental stewardship. A zero emissions mission has always been at the forefront of Orange EV’s messaging.

“Fundamentally, this truck is a better truck, a better way to move goods. Operationally, it makes more sense than the old technology,” Mathisen says. “Overall, the awareness of EV is so much better than when we began in 2012.

But there’s still that lingering question of whether this technology is really ready for primetime. That’s the question. The answer: It is. As people look to understand more about EV, they see, as do we, that the time to do this is now; the call to action to make an environmental difference is happening.”

Answering its clientele call both came and comes with setting a full-service standard. “Being first to market, we had to bring everything up-front, from the training to the charging station to the service,” he adds. “We bring all of these elements as part of the solution.”

Along with full-onsite training for using the terminal truck, Orange EV couples its sale with an onsite service model, typically enabling same day or next day repair. “We couldn’t just bring a truck, we had to bring an overall solution,” Mathisen explains. “We started deploying service technicians to where the customer is located, as opposed to having the vehicle transported off-site, worked on and then brought back. This model provides us a service responsiveness which nobody else can match.”

Also without peer is Orange EV’s commitment to safety, a focus which far usurps that of traditional terminal trucks and high-voltage EVs. “We designed this truck with safety in mind,” he adds. “Unlike most electric vehicles, we’ve designed a vehicle which operates at a low-voltage, at 120-volts. So, if somebody is working on the truck and they do something wrong and need to pull back, it’s different than if you’re operating at, say, 500-volts. “In addition, at this lower voltage, there’s less noise, so the operator is more aware of his or her environment. And, also, because our truck’s braking runs through the electric motor, the stopping distance is half that of a traditional diesel truck, because as soon as you take your foot off the pedal, the vehicle starts slowing down.”

For companies rooted in antiquated diesel thinking, Mathisen is rote on addressing hesitations of changing to electric. Wisely coupled with its trucks, Orange EV crafts and implements site-centric charging stations, and offers an extended duty battery pack, which can run for 20-plus hours before it needs a re-charge. And, unlike other EVs, an electric yard truck is always near its charge source.

“With EV, there’s always a discussion about charging,” says the CEO. “But with trucks, as long as you’ve got your charging solution on-site, it doesn’t matter what’s across town and across country, which are the concerns of personal electric vehicle owners. As soon as our customers start charging their trucks on-site, they learn quickly it’s not nearly the inconvenience they may have thought. Charging can be built seamlessly into the workday, ‘topping up’ during breaks, shift changes, and other non-work time.”

“We love our California customers,” Mathisen says enthusiastically, referencing that 60 percent of it truck sales are in the Golden State. “There’s a sensitivity, an appreciation and awareness for reducing emissions in the state, which has been more significant than anywhere else in the country. Without California, it would be difficult to be where we are as a company.”

Across the pandemic timeline, Orange EV’s trucks provided further proof-of-purchase. “We’ve seen a greater appreciation for a reliable global supply chain. It’s crucial to get goods from one doorstep to another with uptime as good as it can possibly be. Trucks we’re building now realize 99% uptime – significantly better than diesels – keeping operations running.”

In concert with changing minds about the efficiency and safety benefits of plugging-in, Orange EV remains intent on a work world focus toward improving the climate and positively impacting the environment. “We are about addressing climate change, and we are about reducing emissions,” Mathisen concludes. “And we do that through this vehicle. And, yes, the truck has to make economic sense for both our customers and ourselves, but it’s wonderful to come to work every day and know that what we’re doing is having a positive impact on the world.”