Terminal tractors can be ideal starting point for fleet electrification

As featured in Transport Topics.

ORLANDO, Fla. — As fleets consider introducing battery-electric trucks into their freight operations, electric terminal tractors can make a great first step on that journey, according to the North American Council for Freight Efficiency. 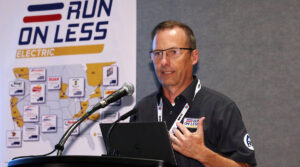 Roeth says Introducing electric terminal tractors can help pave the way for other applications that might be more challenging. (John Somers II for Transport Topics)

In addition to their environmental benefits, zero-emission electric yard vehicles also get high marks from drivers and come with lower maintenance costs than their diesel counterparts. Those were some of the top findings of a new NACFE report released March 6 at the Technology & Maintenance Council 2022 Annual Meeting & Transportation Technology Exhibition. TMC is part of American Trucking Associations.

“What we concluded is [electric terminal tractors] are ready now, and an excellent place for fleets to move forward with electric trucks,” Mike Roeth, NACFE’s executive director, said during a TMC press conference introducing the report.

That evaluation of terminal tractor electrification is among the takeaways from NACFE’s Run on Less Electric demonstration in September 2021, which involved 13 fleets operating battery-electric trucks in a range of different applications across six U.S. states and two Canadian provinces.

The report on electric terminal tractors is the first in a series of four planned NACFE reports, one on each electric truck market segment involved in Run on Less Electric. NACFE said it will publish separate reports on vans and step vans, medium-duty box trucks and heavy-duty regional tractors in the coming months.

Many companies that run heavy-duty tractors and other vehicle types also operate yard tractors at their terminals or warehouses. Introducing electric terminal tractors can help those companies pave the way for other applications that might be more challenging, such as electric regional-haul Class 8 tractors, Roeth said.

“It’s just a great place to buy one, two or 10, and start that electrification journey,” he said. 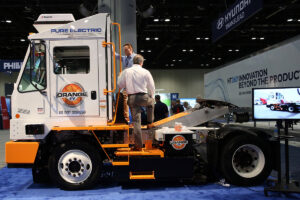 Roeth said terminal tractors are an ideal duty cycle for electrification for a number of reasons. Notably, the vehicles generally operate within logistics yards and transport relatively light loads at low speeds. Plus, drivers said they felt safer operating electric yard tractors because the vehicles are quieter, making it easier to hear their surroundings. They also said they felt less fatigued at the end of the day.

“Drivers rave about these vehicles,” Roeth said. “They just love driving them.”

Electric yard tractors can reduce maintenance costs as well, he added. Terminal use is a difficult duty cycle for diesel aftertreatment systems, he said, in part because it involves a lot of idling. Plus, electric terminal tractors are a particularly good fit for companies that already are using electrified materials handling equipment such as electric forklifts or robotics.

“This is just a natural evolution to go outside of the plant or the warehouses,” Roeth said.

Fleets also can benefit from “opportunity charging” by plugging the vehicle into a charging station any time it is stopped, even if it’s just a short break. 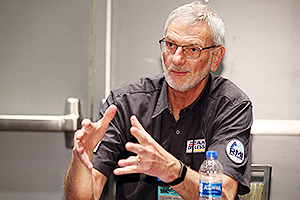 To take advantage of those opportunities, some fleets are installing their chargers near drivers’ break areas so they can easily recharge the vehicle while handling paperwork or taking lunch or restroom breaks. Increasing the charge level even a little bit can help throughout the day, Roeth said.

Kevin Otto, lead author of the report and NACFE’s electrification technical lead, said working with electric terminal tractors can be a great learning experience for a trucking fleet’s entire business, from operations to maintenance.

“I really do believe that when it comes to learning about an electric vehicle and putting it into operation and making it work, the terminal tractor is probably the best alternative for making that happen,” Otto said.